The story of Tammy Christie 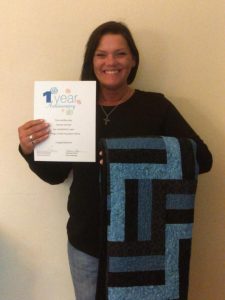 I was born in Phoenix, Arizona, around 52 years ago.  I was born to young parents – Mother, 14, and, Father, 17 – who stayed in Phoenix five years until their divorce.  I was an only child until they divorced while Mother was pregnant with my brother.  My father came to Michigan to be with family and my mother followed shortly after so that her children, including myself, could be with our father.

Mother remarried while pregnant with my brother.  Father immediately married as well and had a child.  Throughout the years my father married five times.  I was passed back and forth every few months until I was 12 years old.  At that time, I stayed with my father, who had become an alcoholic and drug addict.  Mother was addicted to pills throughout my childhood.  From ages 12–14, I lived with my father in a very dysfunctional home and found myself mothering all eight children.  I ran away frequently until I became a ward of the court.  I ran away several times as a ward of the court until I was emancipated at the age of 17.  Throughout my teenage years, I became pregnant five times and lost all of them to miscarriage and one still born.

I started experimenting with marijuana and alcohol at age 14.  Adult men were offering me cocaine and speed.  I accepted and now am shocked that men would offer a 14 year girl drugs.  My drug use escalated.  At age thirty, alcohol, meth, opiates and marijuana were so much in my system that I was totally dependent and strung out and could not function.  My living situation was here, there and everywhere all the time, including my car, in which I lived for two years.

I received one of the biggest blessings of my life when my son, Caleb, was born.  I had him until he was 12 and my drug addiction forced me to sign over guardianship to my sister.  I recognized my sister’s family was healthy and a good place for him to be a child — better than I could provide at the time because of my addiction.  I was feeling shameful and desperate to get well, but could not.

Over time, the cost of my addiction became too great.  I decided to learn how to make meth, which was very profitable and would feed all my addictions.  Eventually this life choice landed me living in the woods, where I lost my car, family, friends, and self-respect, leading to moral decay.   I became an outcast to society and had no regard for the law.  I needed to feed and support my addiction.  This season lasted about eight years.  Only after I had a moment from God did I realize the truth.  I was digging a hole in the woods to use as a bathroom and became all too aware of the senselessness of how I was living.  So I prayed for God to change my life.  I wanted to die, was contemplating suicide, but God rescued me a week later when the police showed up looking for a meth lab.  I handed them all the drugs in my pocket and said “Thank God you are here.  I am an addict and sick, and I do not know how to fix this!”  The officers were very helpful and eleven months later I was placed in a program through Drug Court.  I struggled with quitting the opiates.  I actually went to jail several times during the program which eventually led me to Wings of God.

I now regularly attend my church home and I reach out to a network of people which God has placed in my life.  I have lost both parents during my recovery and God’s strength helped me to deal with it, not substance abuse.

My latest victory is the completion of my GED.  I’m also participating in community service for my church, and participate in Celebrate Recovery, where I occasionally lead.  I talk to my son several times per week and our relationship has been totally restored.

Thank you for believing in me.  Thank you for supporting me and helping to build me up in confidence and strength.  Thank you for giving me a place where I’ll always have sisters through Christ and a safe place to visit and receive much love.  It’s fun to see all the new members to the Wings of God Sisterhood, watch their progress, and encourage them.